JOLIET, Ill. -- Why would Juan Pablo Montoya trade Monte Carlo and Melbourne for Darlington and Martinsville -- and likely take a pay cut in the process?

The Formula One star said he's looking for a more enjoyable atmosphere and a new racing challenge, and thinks he'll find it in NASCAR next year.

Montoya will leave the McLaren-Mercedes F1 team at the end of the season, reuniting with team owner Chip Ganassi to drive the No. 42 car in NASCAR's Nextel Cup Series. Montoya and Ganassi had considerable success together in Indy-style racing before Montoya left for F1 in 2001.

"This guy and I have had a lot of fun together over the years," Ganassi said. "I couldn't be more happy."

Neither could NASCAR, which will benefit from the Colombian's star power and international appeal. Montoya will become the only foreign-born and nonwhite driver regularly competing in Nextel Cup.

The elite F1 community tends to look down its nose at NASCAR's relatively unsophisticated style of racing, so Montoya's migration will give the series an air of credibility.

"The Europeans have to sit up and say, 'What's that about?'," said former driver Benny Parsons, now a television analyst.

Montoya said he is under no illusions that the transition is going to be easy.

"Coming here is going to be probably one of my toughest challenges ever," Montoya said.

Montoya's only experience driving a NASCAR car came in 2003, when he and Jeff Gordon swapped cars for exhibition laps at the Indianapolis Motor Speedway road course.

"It's a great thing for the sport to have such a world-class driver want to compete," Gordon said in a statement before the race. "I welcome him and respect him for accepting the challenge."

His real education might begin later this year, as Montoya may enter a few Busch Series races after the conclusion of the F1 season. He also will drive in the majority of Busch races next year to gain additional experience.

"He said, 'I want to get back to racing.' The guy loves racing. And what better place than here?"

Montoya met with his new crew members and attended a closed-door meeting with NASCAR president Mike Helton and other series officials Sunday.

Although the F1 season runs through October, Montoya sounds like he's ready to put the sport in his rearview mirror and start rubbing fenders in NASCAR.

"Anyone that watches the race, they know it is not the most exciting thing you can watch," Montoya said of F1. "No disrespect. How hard is it to pass in Formula One? And if you pass and then you touch wheels, you're an animal."

Ganassi initially was skeptical that Montoya was serious about NASCAR, but quickly won his old boss over.

"He said, 'I want to get back to racing,"' Ganassi said. "The guy loves racing. And what better place than here?"

Montoya, who won a CART series championship in 1999 and the Indianapolis 500 in 2000 with Ganassi, will replace Casey Mears, who will drive for Hendrick Motorsports next season.

Several open-wheel drivers who have tried to move to NASCAR have struggled with the adjustment. Tony Stewart left the Indy Racing League to become a two-time NASCAR champion, and Robby Gordon has three career victories. But others haven't fared as well.

Hendrick Motorsports vice president of competition Ken Howes, a former F1 crew member, called Montoya's decision "brave." Howes figures he'll challenge for victories at NASCAR's two road-course races next year and, if given time, will be able to learn the other tracks.

"Hope he doesn't do too well," Howes said, smiling. 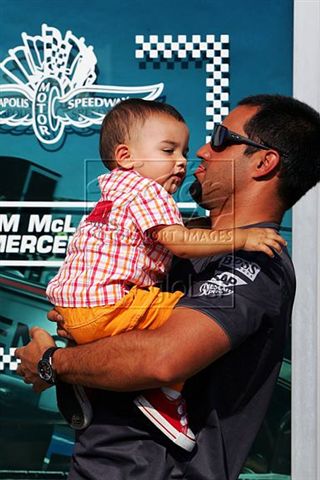